Now begins the story of the move and our first few weeks in Germany, all compressed into one post. Prior to our departure we were visiting our family back in Nebraska. Our itinerary was to take the Amtrak from Hastings, NE to Denver, spend one night at my adviser’s house, then fly on United from Denver to Washington, DC (Dulles), Dulles to Munich Germany, and then Munich to Colonel. After landing and going through customs, we would just be a short 30-minute cab ride away from the Max Planck Institute for Radio Astronomy (MPIfR). That was the plan, at least.

The Amtrak departs Hastings around 1:30 AM. Come about 8:00 PM the night before our departure, Jessica received an email indicating that Amtrak had modified our reservation. Turns out there had been a derailment (presumably a freight train as nothing was in the news about it) somewhere between Hastings and Denver, therefore the Amtrak would not be running as scheduled. Amtrak had kindly arranged bus transportation for everyone leaving the station. Then at 11:30 PM, we received another message indicating our reservation had been canceled and our ticket was being refunded. Jess called and found out that a bus could not be arranged. We frantically called around looking for rental cars and eventually a good friend agreed to drive us to Denver. My adviser, “Dr. Bob,” met us a hour outside of Denver and we said our goodbyes to our Nebraskan ties and resumed our trek to Denver. 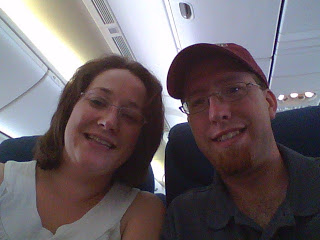 After a great going away party and a good night sleep, we were bound for Denver International Airport. Our travel difficulties continued. At the United counter we learned our planned flights had been renumbered and our itinerary wasn’t updated. We were scheduled to switch to an airplane in Washington, DC, whereas our first flight had us in San Francisco! After about 45 minutes at the counter, things were sorted. We got our tickets and went through security. Of course, our plane was 45 minutes late arriving (mechanical issue), and then 50 minutes late landing (thunderstorm) so we missed our connecting flight. 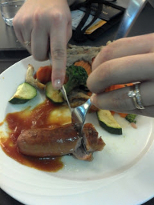 The attendants were flooded by people needing to re-book their flights, but we eventually made it to the counter and were re-booked on a later Lufthansa flight. Now bound for Munich, we encountered the obligatory screaming children and crying baby, but as the cabin darkened things settled down quite nicely.

In Munich, Germany we got our first taste of real German food. The sausage was excellent and the veggies were wonderful. (As an aside, we weren’t able to identify one of the vegetables, seen to the left of Jessica’s knife-holding index finger… anybody know what it is?).

A few hours later, we resumed our flight fun. This time departing on time and arriving on time. Sadly, the light was so quick (perhaps 1-hour gate to gate) that we didn’t have much time for snapping photos. Jessica did like the small can of diet coke she received. Being back on schedule, we caught a Taxi at the Cologne-Bonn airport and were rapidly driven to the MPIfR. Finally, after 16 hours of flights, airports, and taxis we were at our new home.